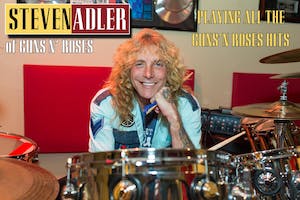 iCal
Google
In memory of those who sacrificed their lives on 9/11/2001, $1 from every ticket purchased will go towards Dells/Delton first responders.

• With over 100 million records sold Steven is considered one of rock's most legendary and recognizable drummers.

• “Welcome To The Jungle”

Steven Adler, best known as the founding drummer of “GUNS N’ ROSES”, one of the most influential, groundbreaking hard rock bands to emerge from the late-80′s L.A. hard rock scene, has returned to pick up where he left off with his re-energized line up of musicians. GN’R's debut album, “APPETITE FOR DESTRUCTION,” which features Adler’s signature groove, will forever be considered one of the greatest rock albums ever made. Adler also recorded the album “GN’R LIES” and the track “Civil War” on the album “USE YOUR ILLUSION 2.” In July of 2010 Steven released his tell-all biography “My Appetite For Destruction — Sex, Drugs and Guns N’ Roses”. The book quickly became a New York Times Bestseller. In 2012 GUNS N' ROSES were inducted into the Rock And Roll Hall Of Fame, with over 100 million records sold Steven is considered one of rock's most legendary and recognizable drummers.

The Alice Army Wants You!

You may remember them from 1990s MTV or may have caught them on tour with one of your favorite artists since they’ve shared the stage with just about all of the Big Rock Bands from the 80s who are currently making their resurgences. Such acts as Whitesnake, Bret Michaels, RATT, Warrant, Winger, Skid Row, Bad English, Great White, have all welcomed The Alice to join them and the list goes on.

What do these bands know about Hericane Alice that you don’t?

What did Atlantic Records know that you don’t, having label mates like Led Zepplin and ACDC?

Hailing from Los Angeles California Hericane Alice got signed as a high energy, party, Rock N Roll Band with a David Lee Roth Style front man who could sing like ACDC and get the place rocking, while stopping to deliver great ballads like Dream Girl and Too Late. The debut release Tear The House Down did just that and set the tone for a great record that alas not many people got to hear.

Hericane Alice was poised to take up the Rock Icon mantle when the 1990s set Party Rock aside to make way for the grunge era. Thankfully, Hericane Alice never stopped rocking and never slowed down, and now hard rock is back and The Alice is a well-oiled machine ready to deliver.

The band has been entertaining people at Fairs, Festivals and, Casinos because of their entertaining show and are putting the final touches on the new album and videos, to come to your show and to blow you away!

This band will come in and play Classic hit songs remade Alice Style along with new and old HA hits and tighter that they’ve ever been!